Something is missing in a home in the mountains if you can’t enjoy the fresh air!

Among the reasons for this customers call were several leaks around the perimeter of their system, cold air penetration in the winter and heat gain in the summer.

We needed to go back to the start.

One of the issues creating the problems was the position of the original openings at the edge of the roof.

We solved that problem by moving the openings. after the old framing was removed, along with the non-insulated glass and an area of the metal roofing, we installed a new roof deck to provide a clean work space.

The new roof deck was weatherproofed while the interior work was in progress.

The ceiling had to go back to the beginning also.

In order to move the openings up the roof slope, the interior openings had to be covered with drywall to provide a new ceiling. Then the new openings were laid out and cut.

The interior was finished with thicker support beams clad with furniture grade plywood, and drywall texture around the perimeter for a seamless blend into the existing walls.

Back on the roof.

We then cut new roof openings to fit standard sized VELUX deck-mounts. The perimeter of the skylights were weatherproofed with “ice and water” seal and designated VELUX engineered flashing kits for metal roofs.

With the skylights installed, the metal roofing was replaced along with new metal roof panels below the skylights matching the the rest of the roof and eliminating the issues of the original skylights at the roof edge.

Finally, four solar-powered VELUX blinds were installed within the venting skylights, to give the homeowner the fresh air, temperature control and comfort they were looking for.

The final results—Beautiful inside and out!

What Is a Deck Mounted Skylight? 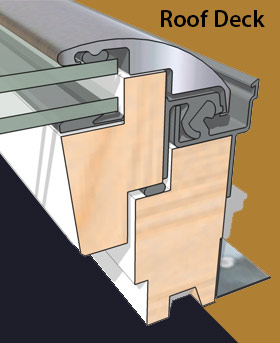 The skylight is then flashed (sealed) to become part of the roof.

A VELUX skylight installed with a VELUX flashing kit is guaranteed leak-free for 10 years. 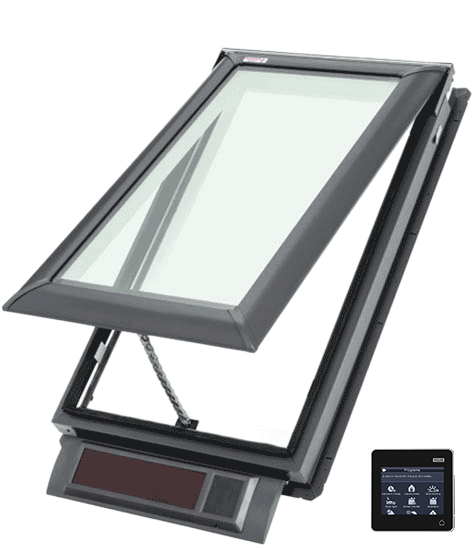 VSS skylights are perfect for replacing existing deck mounted skylights and new installations on a roof with an average to steep pitch.

Get Inspired by Room