The venting dome skylights were in poor shape.

The owner of this residence in the Mission Viejo neighborhood of Aurora, CO reported that while the venting dome skylights had not leaked in 15 years, the mechanisms seemed to be breaking down and one handle had fallen off. In addition, our inspection showed the skylights themselves appeared to have been covered with some film to reduce heat, and that is cracked, peeling, and collecting dirt. Furthermore, there was evidence of water leaking between the domes.

after removing shingles from around one of the skylights, an area of water damage is exposed. Clearing the rest of the shingles in that area revealed a fairly large section of damage to the roof deck. We replaced a roughly two foot by three foot section of the roof deck with new decking and then covered the entire area around the skylight with sheets of  “ice and water shield”, a sticky, tar-like substance that helps prevent ice, water and air penetration.

We replaced the two existing self-flashing dome skylights with two Velux VS C06 skylights. Cedar trim was used on the interior.

And while the owner probably should have contacted us sooner, we were still able to repair the damage we found before it led to more serious damage to the interior of the residence.

Another plus—the owner now has a ten year No Leaks warranty and a warranty against glass breakage due to hail up to two inches in diameter.

What Is a Deck Mounted Skylight?

The skylight is then flashed (sealed) to become part of the roof.

A VELUX skylight installed with a VELUX flashing kit is guaranteed leak-free for 10 years. 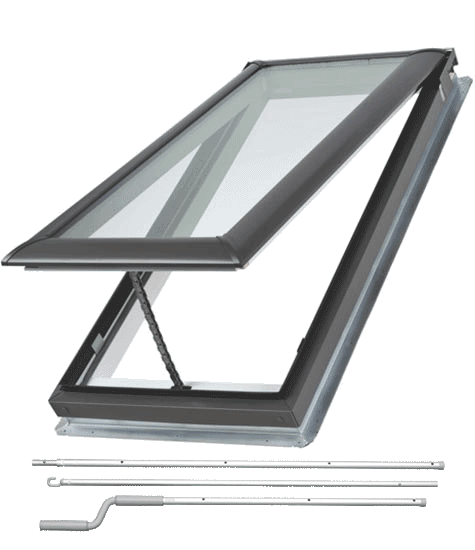 VS manual venting skylights are perfect for replacing existing deck mounted skylights and new installations on a roof with an average to steep pitch. They come in ten sizes with a daylight area from 2.3 to 10.7 sq. ft.